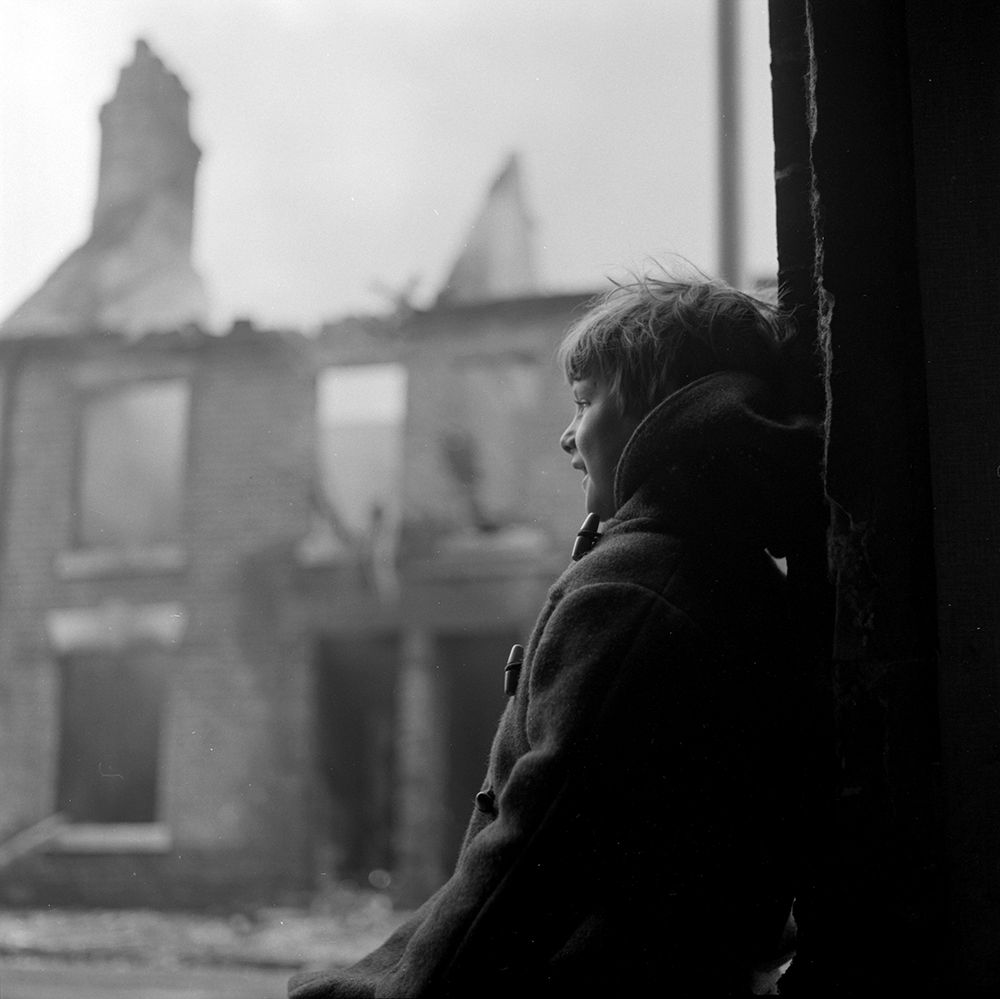 You could feel it coming a long way off.
You weren’t as clever as the golden ones, the effortlessly clever – they were ‘brainy’. Good jobs and perhaps even a nice house in Kirkella awaited them.
They were gifted, the way athletes are, you could try harder, but you weren’t going to win, they were simply built better, graceful and at ease with their answers, whereas you always struggled.
I can remember to this day my registration number for the
Eleven plus – 4472, desperate to get at least something right in
the examination.
No; passing was an unlikely a dream.

We were going to another place

Jervis –the big boys school. A place of Brylcreem, strange odours, and homework. It was here you were made ready for the world of work, not as a Captain of Industry, more a deckie learner, apprentice, mechanic, factory hand, office clerk.

Jervis was run by ‘Foghorn’ (Mr Foyston) the prefects all wore white shirts and sat behind him in a semi circle in the morning assembly. His white shirted storm troopers for law and order – except he wouldn’t like to think of them like that. His was a generation of teachers who had fought storm troopers, they had seen action in the second world war or had been at school while it was raging.

Tough discipline was simply part of the natural order of things, the attitude of the time. School fights and caning accepted, school boy violence, mostly ineffectual, and often funny.
As prefects we had cardboard tubes in which we used to carry our Technical Drawing homework around, these made perfect coshes to maintain order on the stairwells. It wasn’t always the greatest idea. Sometimes your homework would fly out in mid-cosh, crumpled on some hapless first year’s head, who would be left thinking ‘there is justice after all.’

Mr Berry, the Technical Drawing teacher was someone you wanted to please; funny, clever and interested. He was looking to see how much entertainment he could extract from you, so you tried to make sure you didn’t disappoint him. It was from him that I learned the word ‘immaculate’ and understood immediately the value of the word as an attitude to life. We once did a rude cartoon drawing of him and shoved it under his classroom door eager to see the effect. He opened the door immediately, picked up the drawing, laughed and then made us eat it. They would probably sack him today.

Mr Cooke, the history teacher, realizing early on, his was an uphill task teaching history to a school more interested in sport, the humour of casual violence and farting than anything else, hit upon a brilliant strategy. He taught history as a series of bloody battles, told vividly and with panache. We were there at the battle of  Aboukir Bay with Nelson as the canon balls whizzed overhead on the quarterdeck.
Nelson’s strategy for victory was brilliant, his captains used tides and their ships buoyancy to slip in behind the enemies guard to gain a totally a decisive advantage over the unsuspecting French. We were fascinated by the horror and gruesomeness of one of the French captain’s tenacity and bravery under fire. He carried on giving orders on his doomed ship with both stumps of his legs in a barrel of flour to stem the bleeding. It’s an image I can’t forget, but Mr Cooke also made sure there were other things we wouldn’t forget. In the mayhem of battle somehow he slipped in under our guard, and before an unsuspecting class some political theory, economic facts, and social history. It took me years to realize the brilliance of the strategy.

And then Mr Mars our English teacher, who sowed so many seeds of knowledge and inspiration which are still bearing fruit today, that I still find it hard to believe the extent of his influence. He introduced us to the poets Larkin, Betjeman, and Frost. Not that surprising if a teacher did it today, except, apart from Frost they were unknown, not widely regarded at the time, a reputation still to make, but they lived in Hull, and he knew all about them.
In one of the first lessons in poetry I heard the word umbrella rhymed with something like fella, and was shocked into realizing that poetry wasn’t boring, it could be funny, surprising, melancholic, evocative. I still remember the effect Betjeman’s London poem had on my understanding of a bigger world.

‘And my childish wave of pity seeing children carrying down
Sheaves of drooping dandelions to the Courts of Kentish town.’

And of course our civics teacher, Mr Ivor Wilson, his skin turned molten by fire, his fingers reduced to stumps after his aircraft crashed and burned during the war. The effects of war on the human body real and close up in our classroom, the stuff of nightmares. He rarely wrote anything on the blackboard in chalk, the effort seemed too painful, the class silently begging him not too. But he didn’t need to write anything up, you rarely picked up hard facts from his lessons, instead you got the full sweep and drama of history and real lives delivered with humour, panache
and insight. 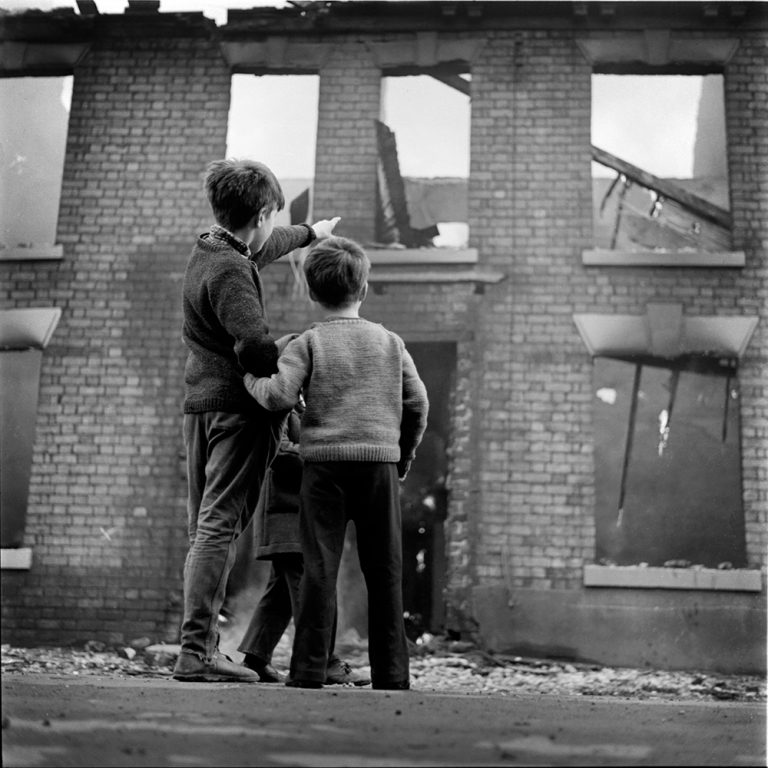 Finishing off what the air raids missed 1972 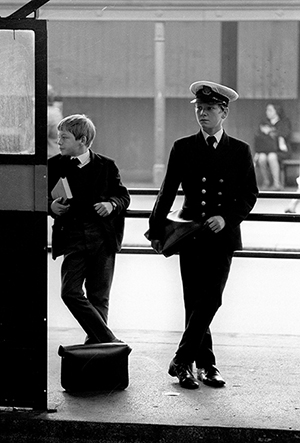 Our maths teacher Mr Houlton was a Yorkshire man to his boots. He made my mam laugh when she saw his workings out on my homework book. The problem he solved in quadratic equations came to neither a plus nor a minus but simply a steady state of zero. As he saw the answer looming he said “so that’s what you’re left with after all that” and he wrote out the final answer = NOWT!!

A typical Hull fear, it was the one thing nobody wanted to beleft with.

Solving mathematical roblems to Mr Houlten was a gleeful occupation and he made it infectious.

The teaching didn’t work for everyone, but it did for a lot of us.
These teachers gave me my unexpected O levels and a way into a different life. Having failed the 11+ you didn’t really expect much, so when you were given a way out and see the world start to open up, you seize those chances you can’t quite believe you’ve been given.
After Jervis I never looked back – until now.

A postscript
I managed to find the telephone number for Mr Mars my old English teacher. I wanted to let him know I’d done good and was having an exhibition at HIP Gallery.
I rang the number a bit wary, he would be quite elderly by now. When he answered I was shocked. He sounded exactly the same as I remembered from my classroom days.
I told him the O levels I had taken at Jervis had been my passport to a better life. He was pleased but told me something interesting; Secondary Moderns were once not allowed to teach O levels. He thought this was terrible, and so did other teachers he used to meet up with in the Hayworth Arms on a Sunday night to discuss teaching over a few pints.
One of the teachers said more or less, ‘to hell with it’ he was going to teach O levels. Mr Mars followed his lead.
I don’t know what I find more surprising – the fact Secondary Modern Schools were not allowed to do O levels or my old teacher in the Hayworth Arms plotting rebellion.