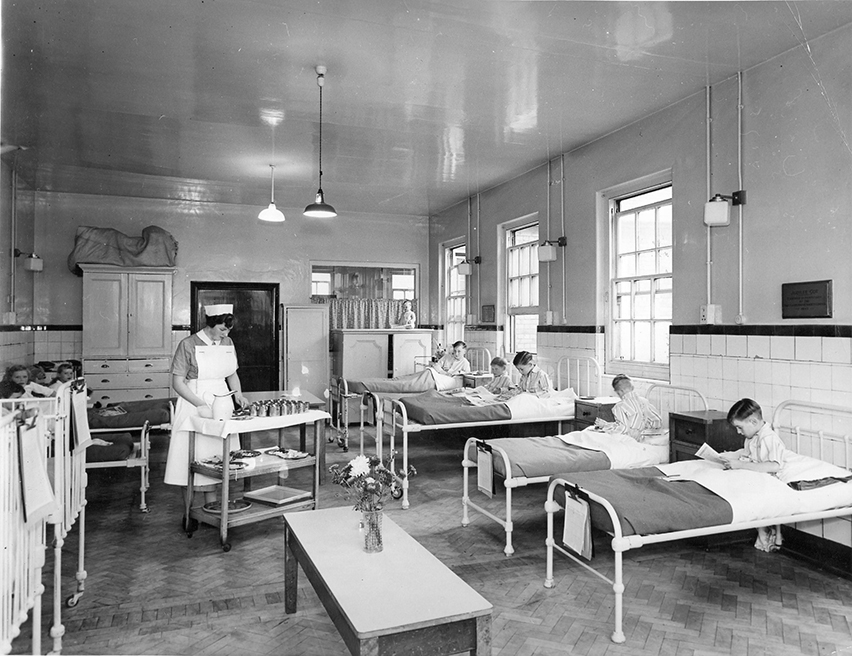 I’ve grown up with the NHS we are the same age. We’ve been through a lot together. In the early years a stay in hospital as a child could often turn out to be good fun, I hadn’t yet grasped the idea of mortality.

The Children’s Hospital at Park Street Hull was the place we went to see the chest consultant Mr Philpots. Somehow he had lost the title of doctor but no one seemed to think any the less of him for all that. We sat in the huge great waiting room and waited. Slowly we moved up one or two seats at a time, more if a there was a big family in the queue, until eventually we were just outside the great man’s door. It seemed to take an age.

A man in a dark suit and a kindly face sat at a desk with a few index cards to look at. He didn’t seem to have much to do. I guess his job was to make sure that the waiting proceeded in an orderly fashion. He had a ribbon of medals on his chest, and access to a bowl of sweets and sometimes if you were lucky you got one.

I’d caught Scarlet Fever at five and was taken into the isolation ward at Castle Hill. There was a line of beds down one side of the ward facing French Windows on the other. As a newcomer you started off on the nurse’s office side, and as kids were discharged you moved along bed by bed until you were furthest away from the nurse’s office and closer to your freedom. It was a system of orderly movement, everyone knew where they were in the pecking order, just how far you had come and when you would be next. It was the same system I would get used to in Park Street and other depots of the NHS in the coming years.

Parents would arrive at Castle Hill for the visiting hour and stand outside the French Windows and wave and smile at you and mouth some kind of encouraging conversation. To this day I still can’t believe it was like this; but it was. There our parents stood, outside in all weathers. Mam visited in the afternoon and dad came when he could, two bus journeys from Bilton Grange. I was in the hospital for six weeks.

If your parents failed to show that’s when the nurses did their best to stop you feeling miserable and alone, assuring you, that your mum and dad would be up to see you real soon.

Nurses to me looked like nurses ought to look. Starched uniforms, a wide black belt, an upside down watch they looked at to take your temperature and frilly cuffs around the tops of their short sleeves. And Hospitals smelt like you expected them to smell. It was a strong smell of antiseptic, a declaration of war on disease and illness, a no go area for infections. If I needed to have a chest X Ray then this would be done by nurses using a chest plate fixed against the wall, in what I thought was part of a corridor.

Hospitals weren’t such bad places, you made friends, played games and sometimes there were rewards.

Tonsils were removed from kids on an industrial scale in the 50’s, the NHS was a zealot in trying to eliminate childhood illnesses and diseases and Park Street was the place we had our tonsils out. After the conveyor belt of operations we all woke up with sore throats, but the reward was ‘Neal Operton’s’ ice cream. A thin slice of Walls ice cream in three colours, most of us hardly ever got ice cream in one colour, never mind three.

My chest had become the main problem – no one could seem to find it. In a town noted for spindly kids I was the spindliest. Someone said if I ran around in the rain I still wouldn’t get wet.

Dr Sanders our local GP was a regular at our house at a time when doctors used to do their rounds in the afternoon. One day he knocked at our door, my mam was surprised, she hadn’t called him out. They stared blankly at each other. Then the doctor said, “I’m sorry Mrs Morris, my feet just carried me here.”

Frequent chest infections meant frequent referrals to clinics and visits to hospital waiting rooms. I feel like I’ve waited for England, but not all of it has been wasted time. You can get through whole novels, learn a foreign language or just sit and relax. When medical records went on computer I was given my old medical file to read in the waiting room, and came across a note to my GP from Mr Jones, another doctor who seemed to have mislaid his doctor’s title. Written on an old fashioned typewriter on very small notepaper it started off “Dear Dr Sanders, this tall lanky lad you sent me…” and it then went on to give a diagnosis of a lung condition I still can’t spell. Maybe not the way doctors would refer to their patients these days, but armed only with a stethoscope, X Rays, and a lifetime’s experience the good doctor came up with a diagnosis that was spot on. It would take another thirty years before medical science caught up with him and was able to confirm his diagnosis one hundred percent with a CT scan.

After all this time I can still only marvel at the intention and function of the NHS. It was a natural extension of an idea conceived in Lloyd George’s government; the Welfare State. How on earth did they ever get that idea to fly? A massively class ridden society agreeing to give up some of its wealth for a fairer society. 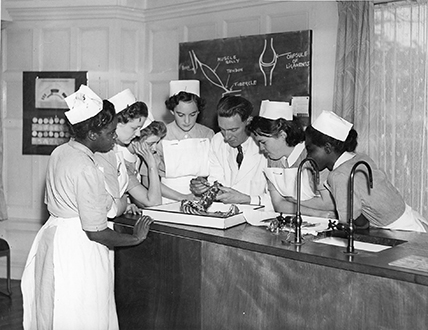 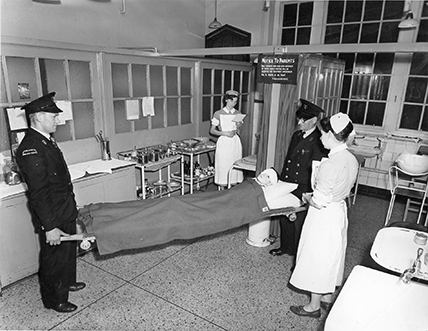 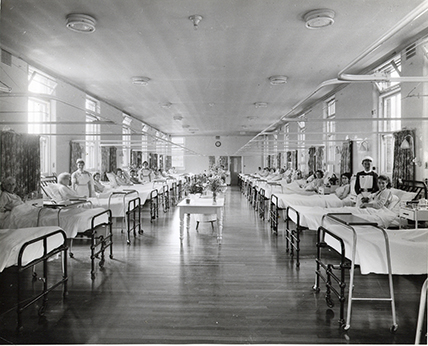 With grateful thanks to Mike Pearson and The Hospital Archive of the East Hull and East Yorkshire Hospitals NHS Trust for supplying these photographs.

And here we are now, apparently the fifth largest economy in the world with Britain’s once envy of the world, the NHS, in dire straights, facing collapse, struggling to survive, while vultures sit and wait and eye the opportunities for rich pickings. It makes you wonder, if we can’t afford to fund a decent NHS who else in the world can? Most people I meet are willing to pay a bit more in tax to make sure this ship sails.

‘The patient will see the doctor now’ a surprising twist of a line the Advertising industry loves because it encapsulates the whole concept and benefit of private medicine in just seven words.
You will see the doctor when you want, you are important, you have priority, you can jump the queue.

Once when Dr Sanders had finished his visit, my mam had a conversation with him on the landing just outside my bedroom door. It was quietly done, but I could hear every word. She was worried, she sounded frightened. There had had been rumours and speculation in the press that the Health Service was going back to privatization, to the old model, soon you would have to pay for your doctors time.

Doctor Sanders listened to the obvious distress, before saying quietly, “I don’t think it will come to that Mrs Morris.”

Ever since then I’ve hated Private Medicine with a vengeance.
How could anyone make your mam feel like that, or anybody else’s mother for that matter?

I wonder what the man at Park Street in the dark suit and medal ribbons would make of it all now? Not the world he had hoped for after the war I imagine, when the nation had all been in it together and people took a dim view of anyone who tried to jump the queue.

If I was him, and I’m obviously not, I’d consider giving the
medals back.